Summer Residencies Call-out 2020 We are inviting proposals for Studio4 Residencies at Chisenhale Studios. Residencies will take place between April and September 2020, ranging between four and six weeks depending on your project needs (special exceptions [...] 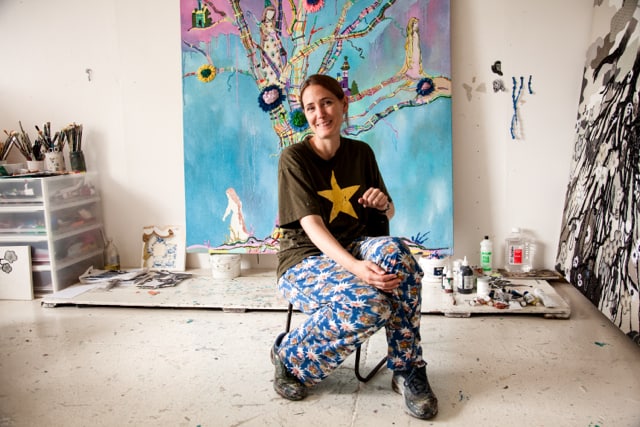 Alicia Paz’s paintings, collages and standing figures deal primarily with identity and the notion of a divided subject/author, and explore the mutability of subjectivity. In recent years, Paz has focused on the female figure: the Self is experienced and presented as multiple, paradoxical, and in flux.  Inhabiting fantastical and exotic landscapes, Paz’s feminine subjects become fused and combined with organic life.  Strange and unsettling visions of tree-women and monster-women also represent the fusion of the Subject with painting itself: she often depicts amphibian or plant-like figures “weeping” pigment, their limbs, hair, and various ornamental accoutrements mud-caked and dripping, as if extracted from a colourful, post-cognitive swamp. In her most recent series, www.aliciapaz.com/azulejos , multi-faceted representations of jubilant “walls” allow for an exploration of identity as an interweaving of narratives.

Alicia Paz has had several solo exhibitions in the UK, France, Germany, Mexico, and Argentina. Her work is also part of various public and private collections and has been the subject of numerous catalogues, publications and reviews. Paz’s up-coming projects include a curated group exhibition at Chatsworth House in Devonshire and solo exhibitions at School Gallery, London (2020) and at the Maison de l’Amérique Latine in Paris (2021)

You can see more about Alicia’s work, and that of all our studio artists, on our Studio Artist page.