The Revenge!- Screening for pupils, teachers and parents at Lawdale Junior School 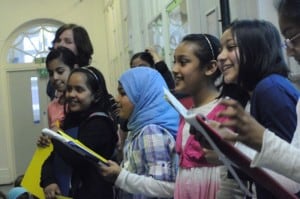 On Friday 11th February at 10am, there was great excitement at Lawdale Junior School. All were waiting with baited breath to see the finished movie, The Revenge.  The film was made by a group of intrepid Year 5’s who were helped (a little) by the artist and film maker Lisa Nash, their form teacher Justine Kavanagh and the volunteer Yasmin Kauser.

The Revenge explores, with slick humour, the depths to which the 9 year old will go to revenge the dastardly deeds of the school bullies. Driven to almost despair by the terrible trickery of the bullies, their victims rally round to exert a well planned and superbly executed superhuman revenge on those self same bullies. Happily, receiving doses of their own medicine persuades the bullies of the error of their ways and, in a manner true to all great screen dramas, everyone lives happily ever after.

The film was screened to all school pupils and teachers with a number of parents also attending.  Judging by the peals of laughter from the audience, the film was a great hit.  The out takes, edited entirely by the children and Ms Kavanagh were, judging by the overwhelming audience response, even better received. No Oscar nominations are in the offing as yet, but Colin Firth should be worried.

The young film makers took questions from the audience. Questions were far reaching and wide ranging and covered themes from the difficulties involved in keeping a false nose on to the tedium of the constant takes needed to achieve filmic perfection.

The Head Teacher, Ms Annette Rook, spoke about the positive impact that making the film had on the creativity, confidence and aspirations of the children involved. She also reinforced the fact that young people need to grasp and take ownership of new media. She spoke also about how Lawdale School intended to embed new media  into the curriculum and use it to enhance that curriculum.

The making of The Revenge was graciously funded by Help a London Child.