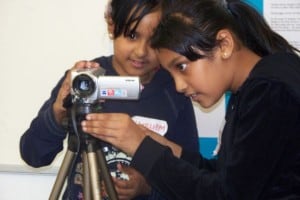 Year 5 children from Lawdale Junior School are making a short film with the artist and film maker Lisa Nash. When they first wrote the script, they named it The Vampire Bullies. However, when it came to the actual filming, the children decided to change the title to The Revenge -because it sounded  ‘punchier”!
This project is introducing  the children to the world of film making, giving them the opportunity to make  decisions about the process at every level. They work through all aspects of  film making from start to finish.  All the parts are acted by them, they explore every required skill from script writing to story boarding and experience every crew role, from director and camera person to clapper board.
After the days shooting the work is subjected to a rigorous critique and the children decide what “take” should go through for the final cut.
Asked what have been their favourite moments so far, the children said:
“I liked the time when the bad boys had the water spilled on them!” Tahibah
“The best bit was when I looked in the mirror and got scared of myself!” Anjum
“I liked saying “Action!” and getting everyone to do what I want!” Reya
“I liked being the clapper board person.” Khaledur
“The bit when they looked into the mirror and turned into a witch and vampire!” Ameer
And some of their worst moments were:
“When I was doing the acting, my hand ached because I had to put it up for so long.” Reya
“I didn’t like having to wear the glasses. When you took them off your head spinned around!” Lamiya 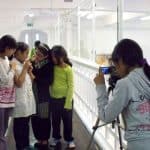 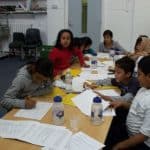 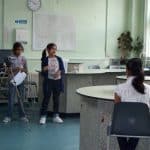